The Saddest Moment from Superman Grounded will Make you Cry

The Superman story arc “Grounded” has seen a lot of criticisms when it was released but it did provide some really gut-wrenching moments and shows how compassionate Superman is when handled by a competent writer. 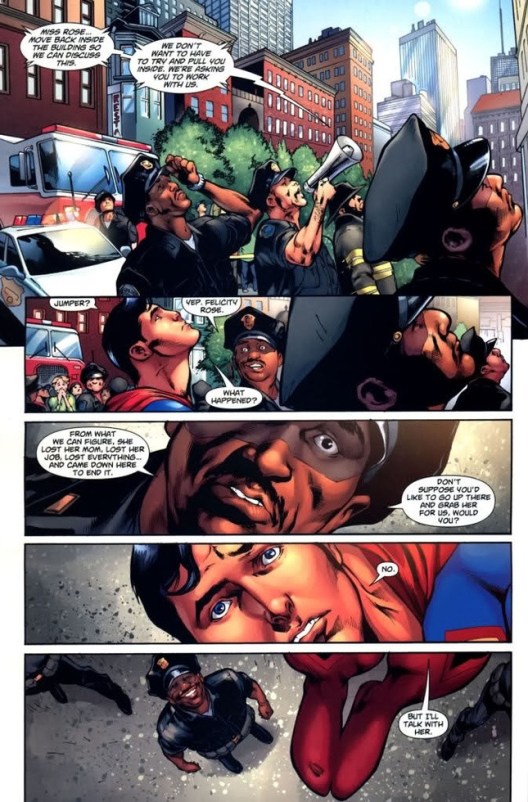 This segment begins with Superman responding to a jumper situation. But with the Big blue boy scout having a crisis of faith of his own, it makes for excellent banter. 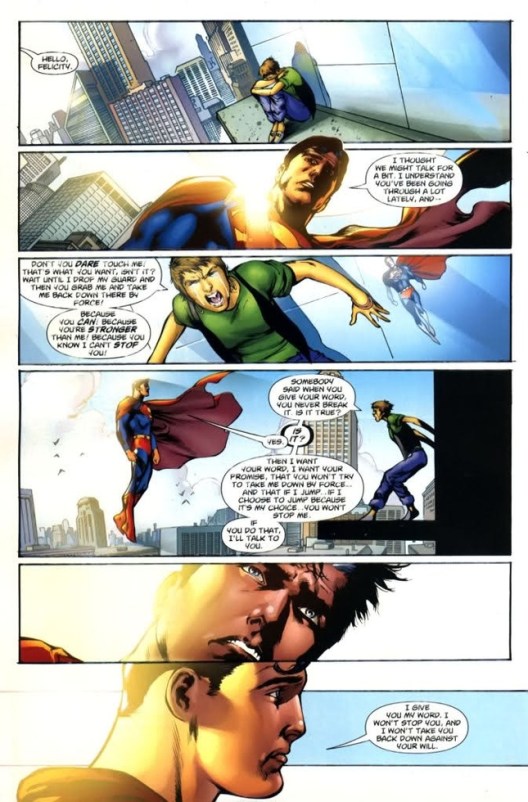 If this were a different Felicity, we would have urged her to jump. But since this is a normal Felicity, we need to empathize with her.

Also Superman acting and speaking like he’s ok with the girl jumping, sounds different but very relatable especially for people in the same situation. 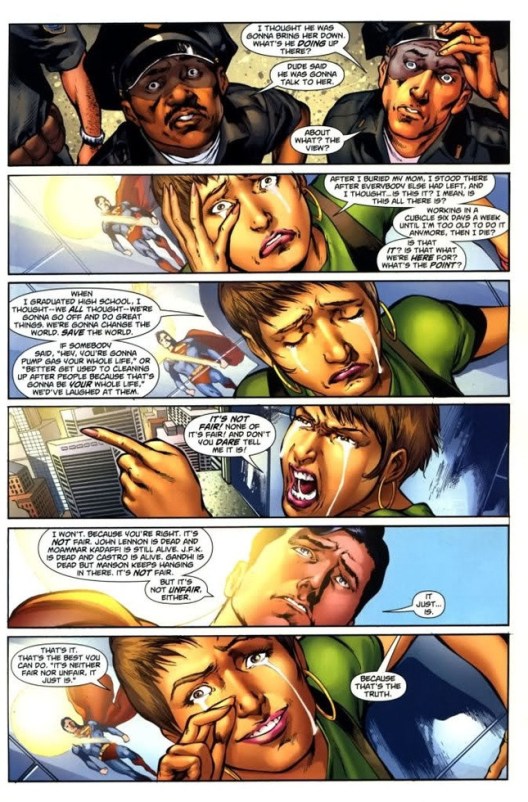 It doesn’t get more feelsy than this. I mean seriously, this is us. This is every idealistic man or woman who wanted to change the world when they finished school. This was 18 year old me, wanting to save the world from itself but getting beaten down by the system.

The above page as well as the one below also shows how Superman would react when faced with this question. Its the most realistic approach to this very real question. 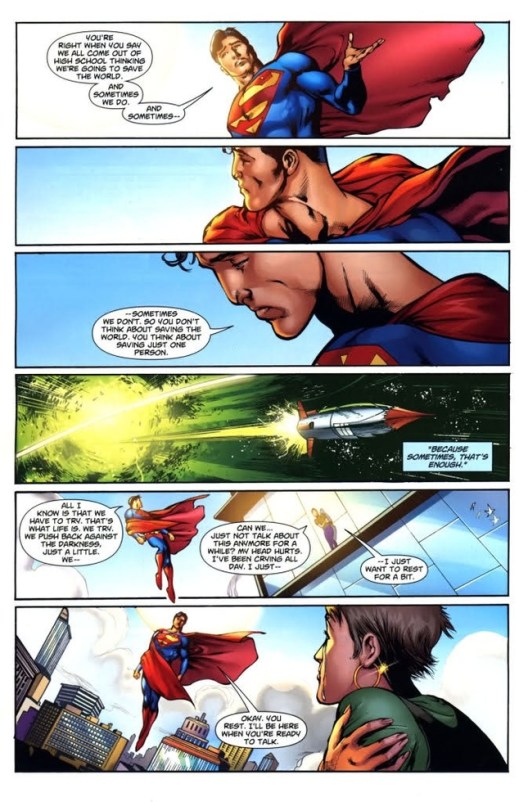 It also paints a picture of how human Superman can be. His look when talking about not being able to save his planet. Even more so, its his belief that every life counts including the girl that is looking to end her life by jumping off a building.

He also respects Felicity’s wishes to be left alone and be quiet. Because sometimes thats all a lonely person needs. Somebody to be with them without judging them, or patronizing them. Just really being there and clutching hands while they look at the darkness. 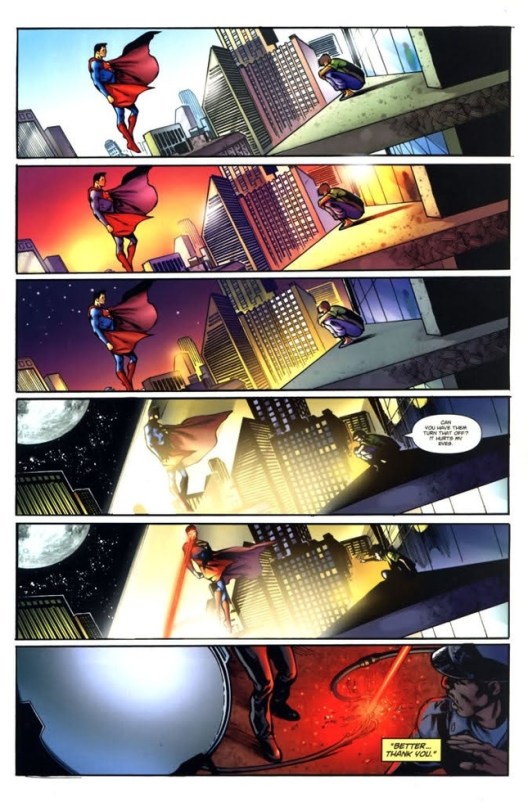 And that moment where Superman heat visions that spotlight bears a ton of feels. 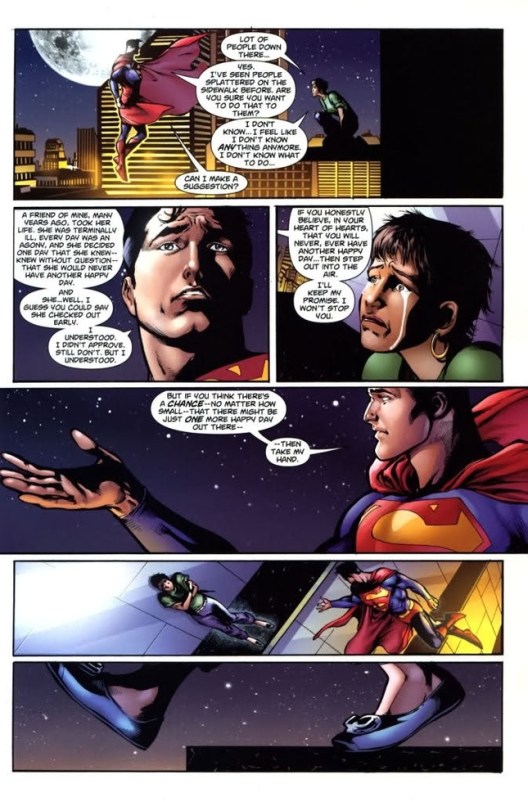 You have to love the build up to the point where he asks her to take her hand. By this point we’ve already deconstructed both characters and established trust of some sort. 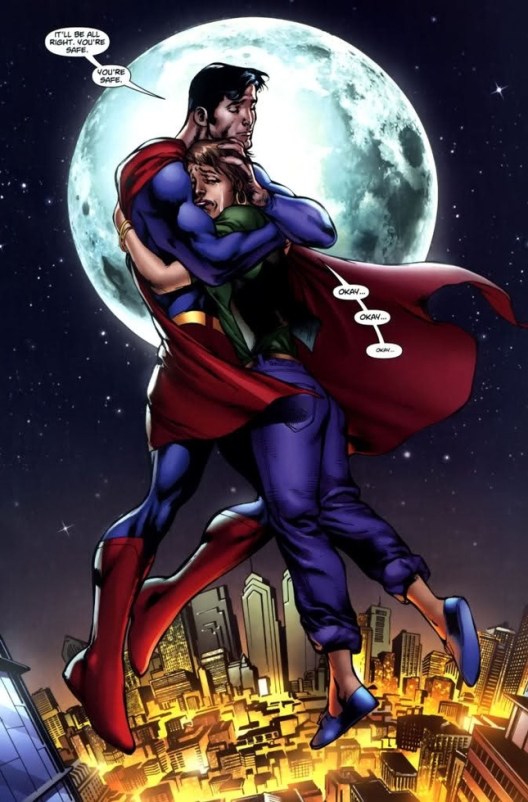 So when Felicity takes this leap of faith, and takes the Man of Steel’s hand, we have undergone this catharsis already. We may not have heard the answers we want to hear but we did get a very real response to all those burning philosophical questions in the back of our minds.